When an application crashes, a crash report is created and stored on the device. Crash reports describe the conditions under which the application terminated, in most cases including a complete backtrace for each executing thread, and are typically very useful for debugging issues in the application. You should look at these crash reports to understand what crashes your application is having, and then try to fix them.

Crash reports with backtraces need to be symbolicated before they can be analyzed. Symbolication replaces memory addresses with human-readable function names and line numbers. If you get crash logs off a device through Xcode's Devices window, then they will be symbolicated for you automatically after a few seconds.

Otherwise you will need to symbolicate the.


See Symbolicating Crash Reports for details. A Low Memory report differs from other crash reports in that there are no backtraces in this type of report. When a low memory crash happens, you must investigate your memory usage patterns and your responses to low memory warnings. This document points to you several memory management references that you might find useful.

Analyzing Crash Reports in the App Distribution Guide discusses how to view aggregate crash reports collected from TestFlight beta testers and users who have downloaded your app from the App Store.

Symbolication is the process of resolving backtrace addresses to source code method or function names, known as symbols. Without first symbolicating a crash report it is difficult to determine where the crash occurred. As the compiler translates your source code into machine code, it also generates debug symbols which map each machine instruction in the compiled binary back to the line of source code from which it originated.

By default, debug builds of an application store the debug symbols inside the compiled binary while release builds of an application store the debug symbols in a companion dSYM file to reduce the binary size. A new UUID is generated for each build of your application and uniquely identifies that build. Even if a functionally-identical executable is rebuilt from the same source code, with the same compiler settings, it will have a different build UUID. Debug Symbol files from subsequent builds, even from the same source files, will not interoperate with binaries from other builds. When you archive the application for distribution, Xcode will gather the application binary along with the.

You can find all of your archived applications in the Xcode Organizer under the "Archived" section. For more information about creating an archive, refer to the App Distribution Guide. If you are distributing your app via the App Store, or conducting a beta test using Test Flight, you will be given the option of including the dSYM file when uploading your archive to iTunes Connect.

Uploading your dSYM file is necessary to receive crash reports collected from TestFlight users and customers who have opted to share diagnostic data. For more information about the crash reporting service, refer to the App Distribution Guide. When your application crashes, an unsymbolicated crash report is created and stored on the device. Users can retrieve crash reports directly from their device by following the steps in Debugging Deployed iOS Apps.

If you have distributed your application via AdHoc or Enterprise distribution, this is the only way to acquire crash reports from your users. Crash reports retrieved from a device are unsymbolicated and will need to be symbolicated using Xcode. Xcode uses the dSYM file associated with your application binary to replace each address in the backtrace with its originating location in your source code.

The result is a symbolicated crash report. If the user has opted to share diagnostic data with Apple, or if the user has installed a beta version of your application through TestFlight, the crash report is uploaded to the App Store. The App Store symbolicates the crash report and groups it with similar crash reports. This aggregate of similar crash reports is called a Crash Point. Bitcode is an intermediate representation of a compiled program. When you archive an application with bitcode enabled, the compiler produces binaries containing bitcode rather than machine code.

Once the binary has been uploaded to the App Store, the bitcode is compiled down to machine code. The App Store may compile the bitcode again in the future, to take advantage of future compiler improvements without any action on your part. Because the final compilation of your binary occurs on the App Store, your Mac will not contain the debug symbol dSYM files needed to symbolicate crash reports received from App Review or from users who have sent you crash reports from their devices. 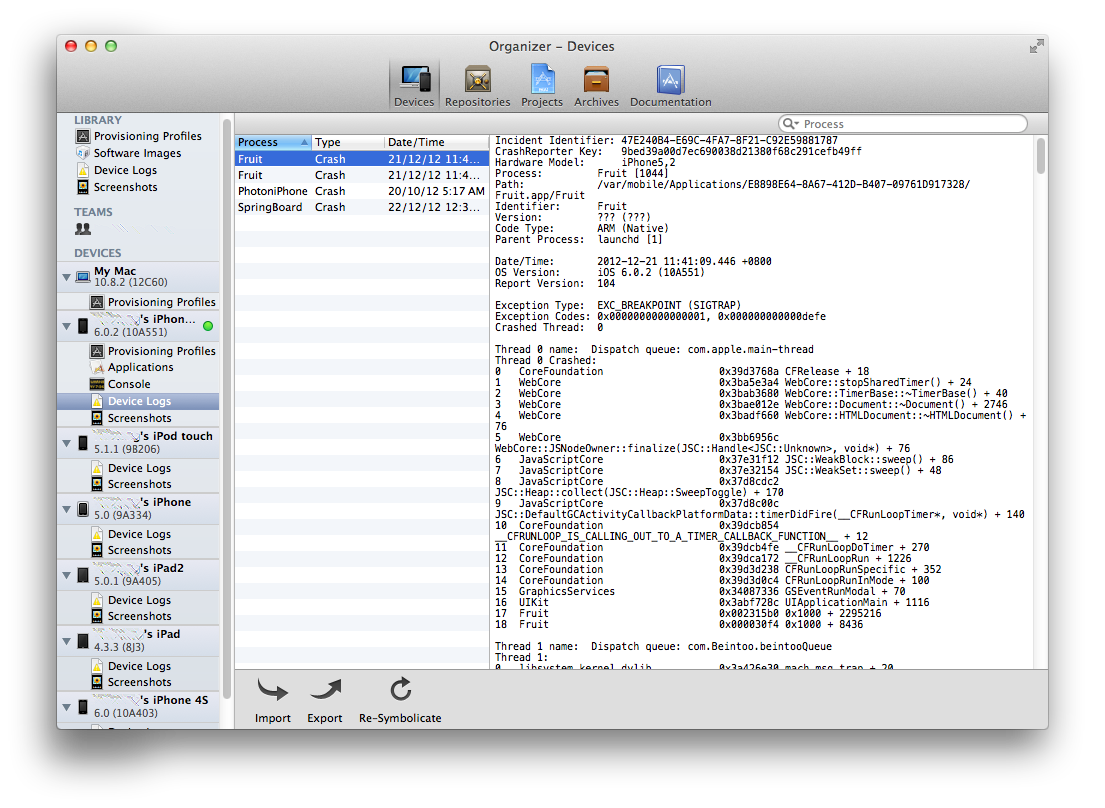 If you choose not to send your app's symbol information to Apple, Xcode will replace the symbols in your app's. Xcode creates a mapping between the original symbols and the "hidden" symbols and stores this mapping in a. Before symbolicating crash reports, you will need to de-obfuscate the symbols in the. If you use the Download dSYMs button in Xcode, this de-obfuscation will be performed automatically for you. However, if you use the iTunes Connect website to download the. A crash report may be unsymbolicated, fully symbolicated, or partially symbolicated. Unsymbolicated crash reports will not contain the method or function names in the backtrace.

Where can I find the .dSYM file to symbolicate iOS crash logs? - Xamarin | Microsoft Docs

Instead, you have hexadecimal addresses of executable code within the loaded binary images. In a fully symbolicated crash report, the hexadecimal addresses in every line of the backtrace are replaced with the corresponding symbol. In a partially symbolicated crash report, only some of the addresses in the backtrace have been replaced with their corresponding symbols.

Symbols for the OS that the that application was running on when it crashed. These symbols contain debug information for the frameworks included in a specific OS release e.

OS symbols are architecture specific - a release of iOS for bit devices won't include armv7 symbols. Xcode will automatically copy OS symbols from each device that you connect to your Mac. If any of these are missing Xcode may not be able to symbolicate the crash report, or may only partially symbolicate the crash report. The atos command converts numeric addresses to their symbolic equivalents. If full debug symbol information is available then the output of atos will include file name and source line number information.

This list contains the UUIDs for each of the binary images that were loaded into the process at the time of the crash. Note that all letters must be uppercased. If Spotlight found a dSYM file for the binary but Xcode was not able to symbolicate addresses within that binary image, then you should file a bug.

Attach the crash report and the relevant dSYM file s to the bug report. As a workaround, you can manually symbolicate the address using atos. See Symbolicating Crash Reports With atos. If Spotlight did not find a dSYM for the binary image, verify that you still have the Xcode archive for the version of your application that crashed and that this archive is located somewhere that Spotlight can find it any location in your home directory should do.

If your application was built with bitcode enabled, make sure you have downloaded the dSYM files for the final compilation from the App Store. You can also use the dwarfdump command to print the UUIDs of a binary. If you no longer have this archive, you should submit a new version of your application for which you retain the archive. You will then be able to symbolicate crash reports for this new version. Incident Identifier: A unique identifier for the report.

Two reports will never share the same Incident Identifier. Right click on the appropriate build and select Show in Finder. When Finder opens, right click on the selected archive and select Show Package Contents. Then navigate to Products , then Applications , and copy the app file to the same temporary directory. Navigate to your temporary directory in the Terminal app. Check to make sure you have the right build.

Sign in to view. Copy link Quote reply. You can symbolicate multiple lines by listing addresses after the load address: Sign up for free to join this conversation on GitHub. Already have an account?

For that, we will need debug symbols a dSYM file and a symbolication tool along with information gathered from the crash report itself. This line in the exception backtrace gives you the stack address, the binary load address within virtual memory for the application, as well as an offset. This last value is simply the difference between the stack address and the load address. Nearer to the bottom of the crash report, you will see the binary images section. Typically, the crashed application will be at the top of the list.

This entry will give you the load address again , the dSYM UUID for this crash, and the architecture of the system that the application crashed on. Now we can gather up everything needed to symbolicate this line. Using this data, you can symbolicate any stack address within a particular crash. If you want to symbolicate a particular crash, you need to locate the matching dSYM file. If the UUID does not match exactly, your symbolicated results will be unreliable at best. The crash report will tell you what dSYM you need in order to symbolicate. For some tools, you may need to provide the slide value instead of a load address.

ATOS will handle the slide computation for you if you give it a load address 0xc and a stack address 0xacc4.